The Riptide titan is a gigantic swim spa that is not for the feint hearted. We had a day testing one of these machines out and this is what we thought.

At 5 and a half meters long and two and a half meters wide the Riptide Titan is one of the largest swim spas in existence. Holding almost 2000 gallons of water when fully laden. This swim spa is so big, its almost a pool! Needless to say there is more than enough room for exercising in. We had a large group of people when we tested this spa out and we tested its 5 person capacity to the fullest. 4 people in the hot tub jacuzzi area and one person swimming was a great experience, with ample room for all. 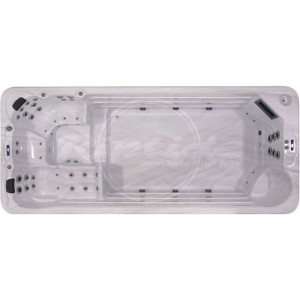 The Moulding Of The Riptitde Titan

The Riptide Titan has a crazy 45 jets and 5 pumps pushing out 2200 gallons per minute. As you can imagine this creates quite a strong current in the water. We turned up the current to full for a little test and I really felt the burn when trying to swim against it for a while.

To be totally honest I felt a little let down by the aesthetics of the Riptide titan. While it does come in a variety of outer claddings the one I saw was very plasticy and not very appealing. The acrylic of the spa its self was quite well moulded and the seating arrangement was especially impressive getting 4 people in while not affecting the swimmer – an achievement even for a swim spa as large as the Titan.

The spa section of the Riptide Titan was also very enjoyable. The jets are positioned excellently and the massage they provided was more than welcome after swimming against the Titan full power!

The titan can come with a built in audio system, however it was not included on this model. The owners of the titan stated they had test swum in one before purchasing which did have the audio system and noted it was unremarkable for the extra cost.

The Riptide also comes with their patented “humpback” cover system. Which insulates more than normal covers and comes with a slant to allow rainwater to drain away easily when covered.

The owners had not reported any issues with their Riptide titan. They have owned several swimming pools and hot tubs in the past so they know how to look after a swim spa properly. It looks like with regular maintenance the riptide is quite reliable.

For the price of the Riptitde titan we are reasonably happy with it. We think that it is a great swim spa that is build from high quality components. And the size of it is awesome. We just think it is a little expensive compared to some other models of the same specifications and is priced highly only due to its size.

If size is your thing, then perhaps the Riptide titan is for you. If not, you could probably save a few thousand dollars if you went for a similar quality model that is slightly smaller.

Do you own the Riptide titan? Have you used one? Let us know what you think in the comments section.