Michael Phelps. The united states Olympic gold medal swimming winner has for a long time been one of the big names in swim spas. Undoubtedly priced at the higher end of the market, the range Michael Phelps has on offer seem desirable to say the least. In this article we review Michael Phelps swim spas and find out if they are actually as good as they seem – or if they are just a clever branding opportunity.

The models that have Michael Phelps name attached to them are actually created by a US company MasterSpas. They claim that the range of Michael Phelps models has been specifically designed to offer the best endless swimming workout possible. And with Michael Phelps being an gold medallist swimmer it would be easy to believe. But are they much better than other models?

One of the most popular models in the whole range of Phelp’s swim spas is the MP signature. It is certainly their flagship model and is proudly displayed all over their website. Much more prominantly than some of his other models. So this was always the one we were going to test first. It was also the one we encountered more often in our day to day lives than any other of micheal’s swim spas.
We used a MP Signature for a few hours and this is what we thought:

The cost of a Micheal Phelps swim spa is such a detailed subject we gave it it’s own article here. We strongly recommend you read it before reading the rest of this article, it will put things into perspective.

At over 5 meters long and 2 meters wide the MP signature swim spa provides more than ample room for resistance swimming and rowing. The 1.5 meter depth is also more than sufficient for a good workout. I would personally of liked it a little deeper, but that is just personal preference and the MP Signature Spa is more than adequate. 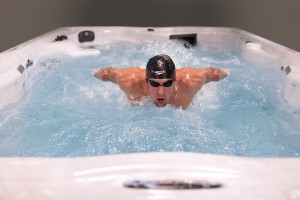 There is no doubt about it, the MP Signature is a beautiful product. Elegant lines and smooth curves make it a work of art. “European Inspired Styling” is how they describe it in their brochure. The LED Lighting makes a great feature in any property, especially when glinting of the stainless steel jets.

Wave XP is a trademarked and patented innovation from Michael Phelps and master spas. It is apparently a way to create a strong and uniform current to ensure that there is perfect resistance for you to swim against when using it. To be totally honest I could not tell the difference between the Wave XP system and other high end swim spas, and in my opinion it is probably just another clever marketing tactic. This being said the current is very high quality, and is capable of quite a large amount of resistance to swim against. 39 jets make up the bulk of the resistance powered by two high power pumps. Again more than satisfactory. The wave XP pro system is an additional extra that the model in this review did not have, however it is certainly not essential – the Michael Phelps Signaturepreformed well with their standard Wave XP system.

The Michael Phelps Signature comes with rowing equipment included. There is not that much difference in my experience between different types of swim spa rowing simulators. These were comfortable and intuitive to use – like most of the other types available out there.

The model I used had been installed with the optional Fusion BT Sound system. This was amazing (its the little things that make the difference in these high end swim spas). The audio quality powered by the inbuilt sub woofer really gave my workout some extra pump!

After using it I sat down with its owners to talk about the gritty details. They mentioned that they have had the unit for several years and preform regular required maintenance on it. As such they have never needed to get any of its parts replaced. They also mentioned that they have an acquaintance that also has a Michael Phelps signature who has also never had any issues with it.

The MP Signature is an indication of the overall Michael Phelps swim spa range then the general impression is good. They are slightly more expensive than other model of swim spa but are honestly a high quality product. They may not be the absolute best value for money, but are certainly not a total rip-off either.