The Aquafit play is a mid range swim spa from Dimension1 Spas. It is half hot tub half swim spa. Unlike most other swim spas the Aquafit play is designed with the hot tub section at the forefront of its design. We tested it out and this is what we think 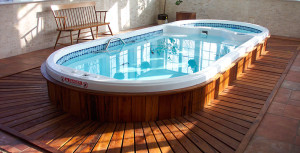 The Aquafit play certainly is easy on the eye

Sitting 192 inches long and 90 inches wide it is not the largest of swim spas available. We used it comfortably for swimming and relaxing in. Although a larger person above 6ft would possibly have issues using this spa if they start to slow slightly against the current.

Unlike other swim spas the Aquafit play has less jets than other spas using just 4 jets with the option to upgrade to 6 jets if desired. I was slightly apprehensive before using this spa, I did not think that 4 jets could provide enough current to swim against. All manufacturers claim their jets are high power, so does Aquafit. But wow, these jets are high power. The current flow is not the strongest I have ever felt, and was a little easy to swim against. But when considering this power comes from 4 jets it is quite an achievement. I personally would have like a little more resistance, so I would recommend anyone thinking of getting a Aquafit play to consider the 6 jet upgrade to make sure you are not left wanting for more water resistance.

The Aquafit play is a beautiful swim spa. The Duratex acrylic interior of the swim spa is a patented material developed by Aquafit is very comfortable to sit in and is very low slip material. The colour of the interior matched the solid wood casing beautifully and is quite honestly one of the best looking models I have ever seen. Especially in this price bracket. Their Terrachina range of casings is standard with the Aquafit play and they have a range of colours and styles available. All of which look very appealing.

As we previously mentioned the Aquafit play is a swim spa more focused upon the spa section than other swim spas. The jets are great for relaxing and the Duratex lining makes a great seat. This being said I didn’t notice a significant difference between the Aquafit play and other exercise focused swim spas when being used as a hot tub spa. I think to be totally honest it is a clever marketing ploy for people who are not sure about getting a swim spa or a hot tub. Although I must say it was perfectly adequate as a spa – just not more so than others.

We were unable to get any maintenance data worth mentioning in this review because the owner had not had their Aquafit play very long. Something that did catch our eye that fits in this section however is the high quality insulation used. Polyurethane foam is used as an insulator (the same stuff freezers are made out of) which drastically cuts down running and heating costs of the spa. The owners claimed they were paying about 30% less than their previous swim spa in heating costs because of this.

Do you own a Aaquafit play? Let us know what you think in the comments section. 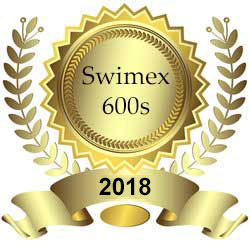