Swimex are a swim spa manufacturer that designs swim spas we think are some of the best for resistance Swimming. So we decided to give the Swimex 600S (or the “mount everest” as it is called occasionally) a review.

As you can imagine swimming in this model is an absolute dream. There is no chance of hitting the sides or the bottom (unless you are really slacking!). One thing that is particularly novel about the Swimex 600S is its ability to be split into 8 pieces for delivery. Meaning you can get this beast into a room that is large, but has limited access. This is a GREAT feature that we think more swim spas manufacturers should take note of.

The current produced by the motor in the Swimex 600S is very strong. One of the strongest currents I have ever swam against. It is very easy to adjust the current to a leisurely swim to make this great for swimmers of all abilitys. It is very clear that a lot of research and development has gone into the resistance of the Swimex 600S and is without a doubt one of the best swim spas for training out there. 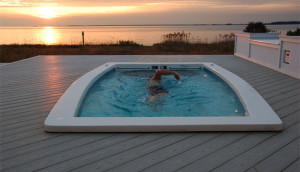 Who would not want to be in that swim spa right now?

The aesthetics of the Swimex 600S i something that I particularly enjoyed that much. It is very flat, and to the point. No fancy bells and whistles. But with a slight curve along the length of the unit.  hat is perhaps exactly what Swimex was aiming for with this model – to use atleast it certainly looks like a sleek, modern, pure training machine.

The actual lining was of a high quality in a crisp white and was very non slip. The spa we used was built in ground so we are unable to comment on exterior casings.

One thing we did particularly like was the swim arrow underwater. This is nothing more than an arrow painted on the floor of the swim spa that you can use to ensure you are swimming on track. Simple but very effective when you are really pushing against the strong current it can provide. The swim arrows colour can be customized upon ordering from Swimex to be any colour you want.

The only downside to the Swimex 600S is its lack of spa facilities. I would have loved a quick massage in the spa after the intense workout it provided. But to be totally honest Swimex only seem to be focusing on extreme usability for fitness training with the 600s and their other swim spas.

So I think that we can’t really hold this against Swimex in this review – anyone buying a Swimex 600S is only really going to be doing so for training and fitness.

The Swimex 600S has several accessories available to it. Including a motorized treadmill, unfortunately the model we tested did not have this. The owners had of the Swimex 600S mentioned that they had tested the treadmill on a model they tried before purchasing and that it was very well built and enjoyable to use but they felt they would not have use for it.

The owners had not had this swim spa long enough to require any maintenance on it. However they did mention that the warranty was very extensive. So they appear to be covered for some time if anything should happen to it.

In conclusion the Swimex 600S is clearly a swim spa for people serious about their swimming.  I would highly recommend it. It is a well built highly developed swim spa that will give you the workout of your dreams.

Have you used a Swimex 600S? What did you think of it? Let us know in the comments below!